Showing posts from May, 2013
Show all

May 28, 2013
Creepy stories were talked about lately in our office. Our office is a house instead of a corporate building. There is a story that the previous owner of the house committed suicide in one of the rest rooms in the house. Recently the caretaker of the house, who was also our messenger, told us that around four in the morning he was able to find fresh blood in the spiral staircase of the house and someone was keep on whistling. It was a mystery if where did the blood came from since the people present on the house during those times was him and his son. Since then, a lot of stories came out from the experiences of the employees. There were stories that an employee's child is talking alone to a child whom they do not know, an employee who was on a midnight shift took a nap and dreamed of a little child and there had been marks of a child's hands on the one of the rest rooms. So far on my almost two years of working in that office I never experienced some creepy things but who ever
Post a Comment
Read more

May 13, 2013
Amidst the hot weather and the long line of voters, it did not discouraged me to vote yesterday on the midterm national election. My relatives and some family friends were running for local positions that I see to it I voted them in showing my support. I did endured the long lines of voters with the smoke of cigarettes of some voters, if only it was an e cigaret , the noises also and hot weather during those time. All in all I spent almost three hours of my time just to exercise my right to vote. Still, I am happy to be able to participate in the 2013 elections.
4 comments
Read more 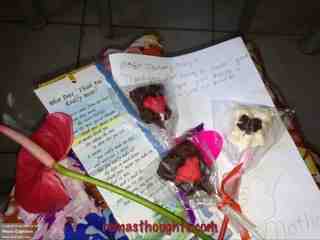 Happy Mother's Day. Though I was not a mother yet, I felt being one today. The youth department of our church prepared a program for mothers. I was touch by the children's thoughtfulness for though I was not their mom they prepared something for me. I received a flower, cards, and chocolates. Though they were  my husband's nieces they treated us as their second parents. I was touched by their thoughtfulness. Hopefully in God's perfect time I could have children as thoughtful like them. Happy Mother's Day to all mothers out there especially to my mamang. I love you Mang!
Post a Comment
Read more

May 11, 2013
Cigarette smoking became an addiction when your body needs continual intake of nicotine, the main ingredient of cigarette. I am glad that some members of my family already quit smoking. I was able to witness how one of my brothers had been into smoking. He would even ask me to buy his cigarettes for him. He would sometimes light his cigarettes even if I am  there that I could also inhale the smoke. I am glad that I never tempted to try one. Once cigarette smoking is started and you became addicted to it, it would already be so hard to quit from it. It was a long process of quitting cigarette smoking on my brother's part. It took him several months to finally say that he quitted smoking. Still, it was not yet the end of it for when he had been with our elder brother and saw that he is smoking, he returned back to cigarette smoking. For quite some time he is smoking again but out of nowhere both my brothers quitted smoking. Maybe their strong religious belief gave them the deter
2 comments
Read more 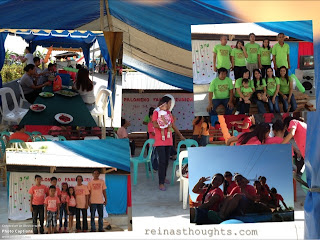 It was such a happy day. A day worth reminiscing. A day for a family that lives harmoniously. Indeed my expectations for this family reunion was highly met. The food, program,games, shirts, parade and the people who were there made the event so great. I am happy to be part of it.
1 comment
Read more 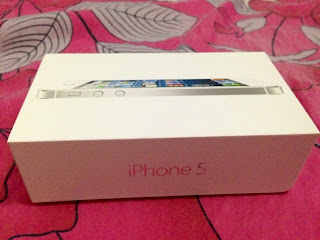 Happy new to me. It's a new cellphone considered as a gift to myself. My husband advised me to do so since I kept on complaining that I am tired with my job. He advised me to subscribe to a plan for this phone to boost myself to keep on working hard since this will remind me that it is only one of the fruits of our labor. But then it was funny because after I acquired it, there had been some regrets because it is a bit expensive and I considers it as a luxury already. After so much thought about it, I console myself that it is ok and I think I deserve it somehow. It is a gift to myself.
3 comments
Read more

May 01, 2013
I am excited. I will be attending family reunions for the rest of the week. It would be a good chance to be able to met my relatives. I don't remember anymore when was the last time I attended a family reunion. I could not anymore remember when was it. Maybe if I am required to write an essay about it, I will let someone to write an essay for me because I could not remember anymore the feeling or the happenings on it. I am happy for I was able to apply for leave just for this occasion. It is a good time for me to use my available leave credits to relax and bond with my family. I will be attending the reunion of my grandmother's family on my father side. It would be the first time that we will gather together as a family on my grandma's side. Honestly, I do not know much about my grandma's family that I am so eager to meet them. Maybe only five persons have I known as my relatives being related to my grandmother's side. After my grandma's family reunion,
1 comment
Read more
More posts